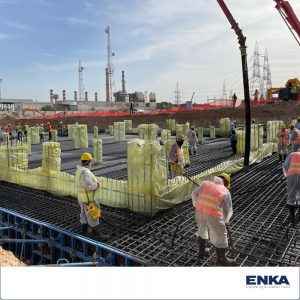 The company reported today: ‘‘We are pleased to announce that on June 5th 2021, the first structural concrete was poured on Tripoli West 671 MW Simple Cycle Power Plant project of ENKA in Libya.’’

The fast-tracked project is implemented in consortium with Germany’s energy giant Siemens.

The contracts for project had been signed in 2017 with the General Electricity Company of Libya (GECOL) to meet Libya’s acute power generation deficit.

The Tripoli West project is based on a power island configuration for four SGT5-PAC 2000E Siemens combustion turbine generator units.

The turbines of the plants will be dual fuel fired with light fuel oil and natural gas. Power will be generated in the CTGs and stepped up through main transformers to the grid. The project is planned to be completed in 2022.